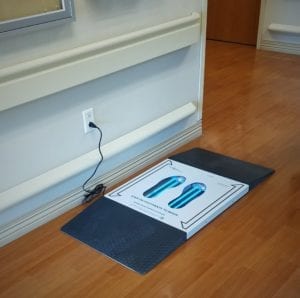 The objective of this study is to measure the effectiveness of the patented Ozone + UVC (UVZone) technology used by the Shoe Sanitizing Station to destroy 7 of the most severe pathogenic microorganisms. The technology was tested at 6,8, and 10 seconds to measure the level of disinfection achieved at each interval.

Each microorganism was individually inoculated on separate Petri dishes and incubated at appropriate temperatures for a specific time period to allow for growth and colonization. Control samples were also taken for each pathogenic microorganism.

After the preparation of the microorganisms, a shoe sole (hard rubber substitute) was inoculated with each microbe and then placed onto the sterilized shoe sanitizing station with a 150 lb. volunteer on top of the shoe sole to mimic typical pressure on the station from use. The volunteer and the shoe soles were separated by a sterile barrier so as to prevent cross-contamination. Three tests were completed per microorganism, and time period. Two samples were then taken from the shoe sole and placed in a petri dish and incubated for the appropriate lengths of time at specific temperatures.

Following incubation, the viable colonies were counted, and data recorded. Log and percent reductions were calculated for each test sample and control sample.

The results from this study showed that for every type of microorganism tested a reduction of at least 98% was seen. Please refer to the charts below for the results at 6,8, and 10 seconds. Based on the traffic flow of a typical facility, we recommend the unit be used at 8 seconds.

Why is this study important? Because floors matter! Studies have shown that shoe soles are a significant source of pathogenic microorganisms, and that disinfecting undersides of shoes is an important step to reduce the microbial load within a facility.

Schedule a free, no obligation virtual demo today to learn more about the shoe sanitizing stations.